Warning: "continue" targeting switch is equivalent to "break". Did you mean to use "continue 2"? in /home/sandbox2017/public_html/howardecker/wp-content/plugins/essential-grid/includes/item-skin.class.php on line 1145

Warning: "continue" targeting switch is equivalent to "break". Did you mean to use "continue 2"? in /home/sandbox2017/public_html/howardecker/wp-content/plugins/revslider/includes/operations.class.php on line 2715

Warning: "continue" targeting switch is equivalent to "break". Did you mean to use "continue 2"? in /home/sandbox2017/public_html/howardecker/wp-content/plugins/revslider/includes/operations.class.php on line 2719

Warning: "continue" targeting switch is equivalent to "break". Did you mean to use "continue 2"? in /home/sandbox2017/public_html/howardecker/wp-content/plugins/revslider/includes/output.class.php on line 3622

Warning: "continue" targeting switch is equivalent to "break". Did you mean to use "continue 2"? in /home/sandbox2017/public_html/howardecker/wp-content/plugins/nextend-smart-slider3-pro/nextend/library/libraries/localization/pomo/plural-forms.php on line 224
 Tech, creative and media industries should remain interested in more than “trophy space” – Howard Ecker + Company Skip to content

Tech, creative and media industries should remain interested in more than “trophy space”

Tech, creative and media industries should remain interested in more than “trophy space”

Yes, it’s true. Tenants from the tech, creative and media industries leased more than 8.5 million square feet in “trophy buildings” across the country in 2017. That’s an increase of seven percent over the year prior. Examples: Spotify snagged a 378,000 square-foot lease in 4 World Trade Center in New York, and Facebook signed a 436,000 square-foot lease in a new San Francisco office and residential tower.

I recently read an article about how these younger companies (including even some startups) have begun favoring the modern office buildings and retrofitted towers because they can be designed easier to include open-floor plans, exposed ceilings, natural light, etc. — in other words, responding to the design criteria these companies often seek. The article also suggested the converted warehouse/loft spaces that are so desired by the young companies may not provide enough potential room to grow. Flexibility is a major issue.

While it is difficult to argue with some of the statistics, here are a few things to remember with this:

1.) Even if some big companies are taking an “old” space, they’re still building the most efficient space possible. Apple building trophy buildings could be considered the top example. Google, right here in the West Loop of Chicago and in the meat-packing district in New York, has taken old buildings and turned them into amazing spaces.

2.) Realize the definition of “trophy space” for banks, lawyers and financial companies is different than what it is for the majority of tech companies. Tech companies usually focus their design to satisfy their young employee base, and it often includes rest areas and game areas in an effort to make a cool 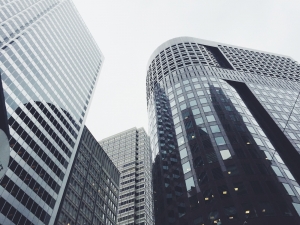 space. The managing partner of a law firm or financial firm clearly has a different idea of “cool.”

With tech companies, you have younger people making the decisions as to what’s cool. Senior partners at a law firm and presidents of a bank or major financial institution have worked their way up the ladder for years, and their perception is different. You’re looking at an age gap of the decision makers at what could be 50 years, clearly dictating a different perspective on “cool.”

Cool is always in the eye of the beholder, and when there are decades of gap between decision makers, you are obviously going to see a difference.

3.) Going back to a thought from a previous blog, I’ve seen too many times how young companies get ahead of themselves and lease way more space than they need, anticipating growth which may never occur even if turn out to be incredibly successful. Often they are convinced by real estate providers that they need to grab all the extra space they can while it is available. This has led to millions of square feet for sublease space around the U.S.

4.) Oftentimes it is forgotten that some very old buildings are actually much more efficient — particularly for the tech industry. New center-core, column-free buildings appear to be more efficient, but if line of sight is critical, then center-core buildings do not work. Take, for example, the old Continental Building at 231 LaSalle or the current Chase Plaza building in Chicago. These buildings actually have cores on either end of the property in order to provide security when they were built. Today, however, they offer tech companies the most open-floor plan possible.

Things are adapting for sure, centered around the clients’ needs. Regardless of whether these newer companies, big or small, stick with the older buildings or gravitate toward new construction, people want flexibility and the open-floor plan. I don’t think those two ideas are going away anytime soon.