What does it mean for Chicago when a building like the Hancock loses its iconic name?

Home/Blog, Chicago, Houses and Skyscrapers, Press Release, Relocation, Thought Leadership/What does it mean for Chicago when a building like the Hancock loses its iconic name?
Previous Next

What does it mean for Chicago when a building like the Hancock loses its iconic name?

I’m sure you read or heard a few weeks back that the John Hancock Center’s naming rights will soon be up for sale. The namesake insurance company, which built the 100-story, 1,128-foot skyscraper nearly 50 years ago, asked to have its name and logos removed, much like they did from the 62-story John Hancock Tower in Boston in 2015 when its lease was up there.

And while it caused a bit of an uproar in Chicago, here’s something to remember: Hancock, at most, leased only 4,000 square feet of space in that building for a public relations office. They had their name on it because they were the mortgagee and, after they foreclosed on Jerry Wolman, the original developer, they became the owner.

Over the years, we’ve had great iconic buildings scattered throughout the framework of the city. And really, the Hancock is the last to lose its name. Sears Tower, Amoco Building, Brunswick Building, Borg Warner Building, Equitable Building, First Chicago Bank building, Inland Steel at 30 W. Monroe, all of them. It’s a shame. People don’t even know these names anymore. The IBM Plaza at 330 N. Wabash is another.

We’re talking not only about a chunk of the character of these properties being removed, but the fact we’ve lost these names has been an emotional blow to the city.

Chicago is known as the City of Big Shoulders. This city was built on Amoco, built on Sears, built on Inland Steel. These were the buildings that were key in the late ’60s as far as the turnaround of Chicago. Every one of these tenants — Sears, IBM, Amoco and others had all planned to move to the suburbs because the city was in such bad shape. There was lots of turmoil back then. 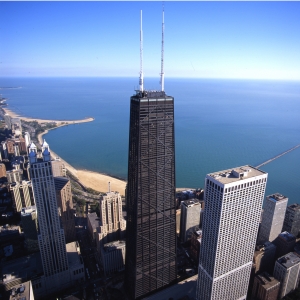 But the original Mayor Daley said no, and pretty much broke some arms, but he kept them here. And together, they anchored the downtown area with these iconic buildings.

These were the big companies that carried the city at a time when things could’ve gone either way. Sad to see that, with the Hancock, we’re losing the final one. Architecturally, they’re still quite significant, but no longer really iconic. That big-shoulder personality we as Chicagoans have taken so much pride in has largely been lost by the way methodically, these names have disappeared from the economic framework of the city. Sears is the perfect example, as it just isn’t the retail giant it once was.

Now the question is, is all this overblown, or should we pay attention to it? Currently, we’re chasing the Amazons of the world and bringing companies like McDonald’s back to the downtown area — where they started — but they aren’t building the architecturally significant buildings here anymore.

It leaves open the subject that great architecture will stand the test of time. And great architecture, by and large, has done just that. The Transamerica pyramid in San Francisco, Rockefeller Center in New York, Penzoil Place in Houston — these are iconic buildings still today.

But nowadays, most companies aren’t seeing the overwhelming need to create an iconic structure that’s representative of their brand and values. Sometimes they view the interior to be representative, and that’s fine, but have we reached a crossroads, a time where architecture is not a particular advantage anymore?

We know Apple has built an iconic building in Silicon Valley, and it looks fantastic. Amazon has seen the importance of iconic architecture and the advantages of it in Seattle, and I hope they will replicate this in wherever HQ2 ends up being located.

It looks like the Hearn Company will be holding on to the Hancock building for at least two or more years, and it’ll be interesting to see what happens to the naming rights. I think it’s still important!

Think about it: Why does Google have their name planted huge on every building? Apple? Amazon? True leaders of the new economy feel that their brand is so critical that they’re locating in buildings and constructing buildings where their name is prominent on the exterior.

In conclusion, look at the Wrigley Building on Michigan Avenue. Perfect example. Think how important it is to their brand.

People don’t know who the hell Willis is and seem not to care because if the tenant doesn’t have real brand identity or doesn’t promote it, it can be meaningless. And that — combined with the old guard falling by the wayside — is sadly where, for the most part, we are at these days.